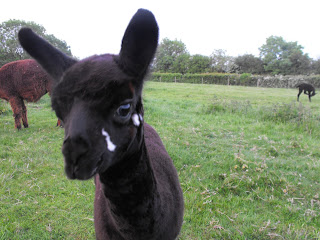 Our next birth was unexpected as well! We were at Newark showground on the Thursday before the show when we got an emergency phone call from Martin's mum to say she had found a cria in the paddock. She had run for towels & done everything right but the wind was icy cold. We dashed home put him & his mum Coco in the shed with the lamp, he didn't look good, prem but only 3 days before 11 months. Called the vet who said we had done everything we could & we just needed to get his temperature higher to give him a chance, so we fed him bottle colostrum, warmed him further & had to leave him 4 hours later in mum in laws care so we could go & finish the penning for the show! Fed him until midnight & really didn't think he would make it through the night but he's still going strong & is a real character as you can see from his photo.

Found him today in the paddock with the yearling boys, happily bouncing around, still not sure how he got there, he always sits the other side the gate to them & not with his mum!
Posted by Clare at 20:14