Celeste an hour ago 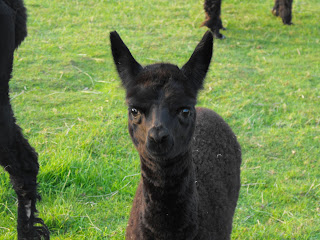 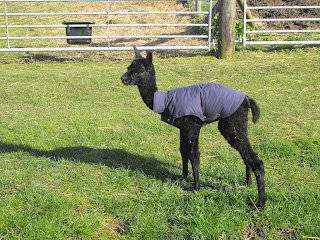 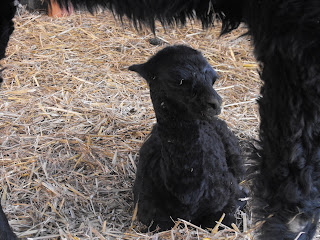 It's been quite a while since I blogged, as the day after lambing for 3 weeks, 2 days at the Heart of England Fiesta & a day shearing 26 alpacas, we found ourselves the organisers of the National Show at Newark. But I think I need to blog in order so I will go back to 11th April when we had an unexpected arrival.

Celeste was a little too early & found herself being born in the wrong paddock. We had been meaning to move her mum Cosmic for a few days & she was definitely going to be moved that afternoon but Celeste decided to arrive in the morning at 319 days. We didn't see her for probably an hour & there was a very cold wind, so we had a cold but large cria & an upset mum. Cosmic did not settle when moved into the barn & we ended up with her in another barn with a lamp & fed Celeste from a bottle until midnight. Next morning all was well, Cosmic calm & Celeste feeding from her mum, a very happy ending.

Cosmic herself was a prem she was born at 307 days a very small cria but she had a strong will & was very clever. Martin milked her mum Plum & fed her every hour for the first 24 with a syringe. We fed her from the bottle pretending it was one of her mum's teats so she had to look for the milk in the right place & after 6 days she moved off the bottle on to her mum. Today she's a lovely big strong girl you'd never believe she was a prem.